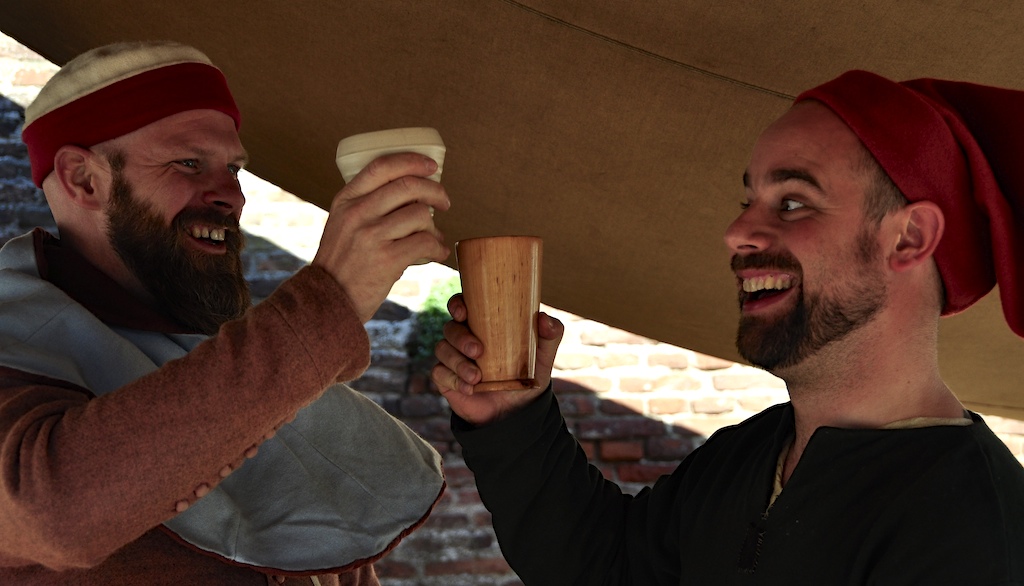 Albrechts Bössor (translated ‘Albrecht’s Handgonnes’ – meaning gunners) is a reenactment/living history society, trying to recreate life in a group of royal handgunners during the last 50 years of the fourteenth century, with special focus on King Albrecht of Mecklenburg’s Swedish reign (1364-1389). We have been active since the summer of 2003, when we went on our first event in Azincourt, France. We fought at the French side, but since then we have been fighting with the English (and against them), we have been fighting against the Danes, and alongside Italians. We have been going on events in Sweden, the Netherlands, Denmark, Germany, France and Italy, and continue to do so every year.

Our group is non-religious and non-political; we have no desire to influence political or religious courses of events – we are into history, that’s all.

The less technical explanation is that we are a group of people interested in the period, good company and activities outdoors. Most of us like handicraft, and as many like to explain and to display with the purpose of educating. All of us of course like to have a good time, and that is maybe half of what Albrechts Bössor is about; equal shares of educating one self and others, and having fun with people whose company you enjoy.

We consider our members as being unique and possessing unique skills and talents. Personal contributions are what make our group strong and are always appreciated.

We stand for that we always do our utmost to be exact in our interpretations, that what you see when you meet us, is a precise picture of different aspects of the 14th century. That is our aim, however difficult if not impossible to achieve. We also stand for a mission to explain and educate, as we feel the middle ages has been treated unjust in movies and a lot of books, and therefore we have the approach to put things as right as we are able to.

We chose the period because not many people interested in living history choose the latter part of the fourteenth century. If they do, it is certainly few of them focusing on Sweden or Scandinavia. We feel that the period is as important as any other period, especially as the reign of Albrecht of Mecklenburg is treated poorly (if at all) in Swedish history. In history books he is merely mentioned as a tyrant, and always as opposed to his successor, queen Margareta of Denmark, Sweden and Norway.

Even though he might not have been the most leniant of monarchs, perhaps there were a bit more sides to him. He managed to rule a turbulent kingdom for 26 years, and stood up to Swedish nobles with the opinion that he should be a ruler only by name for as long.

Discuss with us at our Forum or at our Facebook-page.

Want to get in touch more privately? Send us an e-mail at info[att]albrechts.se